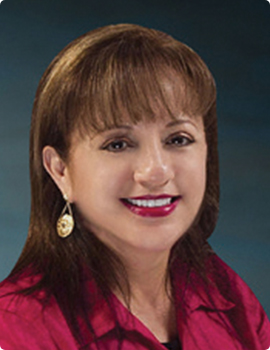 Elvira Espinoza, Chief Communications Officer, was born in Los Ramones, Nuevo León, and raised in Mexico City.  In her native country, she was a recognized journalist and worked for national publications such as Novedades and various weekly magazines such as Claudia, Revista de Revistas, and Revista de America.

At an early age, Ms. Espinoza began her career as editorial coordinator for the magazine Última Moda.  Later, she accepted the position of national editor for Vanidades, a publication dedicated to women with the largest circulation and prestige in México.

In 1982 Ms. Espinoza immigrated to America, and on 1983 she co-founded Unidos Magazine, the first magazine of political and social analysis aimed at the Hispanic community in Arizona.  In 1986 she co-founded CAMBIO! Hispanic Bilingual Magazine, a bilingual publication that has received numerous awards and recognition for excellence in journalism.  In 1993 Ms. Espinoza co-founded the Public Relations agency Ortiz & Espinoza, the first of its kind to offer comprehensive multicultural services to local and national corporations.

In 1999 Ms. Espinoza joined The Ashland Media Group (publishing home of La Voz and TVyMás) as the Publisher of TVyMás, an entertainment magazine with the largest circulation in the Southwest.  In 2001 she was named Publisher of both publications and continued in that position after GANNETT (the largest U.S. newspaper company) acquired Ashland Media in 2005, where she remained as Publisher until 2013.

On September 15, 2014, Ms. Espinoza, under the support of Raza Development Fund (RDF), launched mixedvoces.com a digital publication to serve the online informational bilingual needs of the Latino community in Arizona and the country.  In December 2015 RDF facilitated negotiations and mixedvoces.com became part of Arizona State University’s Walter Cronkite School of Journalism & Mass Communication.