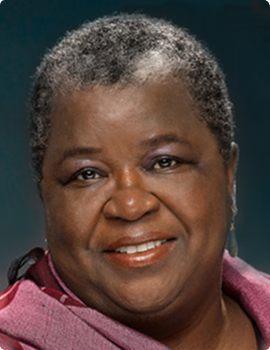 Ms. Gambrell is steadfast advocate for lifting and revitalizing our most vulnerable, low-wealth communities.

Ms. Gambrell is also the longest serving and first African American woman to be appointed as Director of the U.S. Department of the Treasury’s Community Development Financial Institutions Fund (CDFI Fund).

During her tenure from 2007 to 2013, the CDFI Fund experienced significant growth, more than doubling funding under its flagship program, and it strongly supported a CDFI industry responsible for providing affordable capital, credit, and financial services to low-income neighborhoods. Under Ms. Gambrell’s leadership, the CDFI Fund also designed and administered a number of new initiatives targeted to underserved markets, including the Capital Magnet Fund, the Healthy Food Financing Initiative, and the CDFI Bond Guarantee Program.

Ms. Gambrell retired from federal government service in December 2013. Currently, she is serving as CEO for Appalachian Community Capital, a CDFI regional intermediary comprised of 13 CDFIs working together to help address the small business needs in the Appalachian Region. She is also a visiting, non-resident scholar at the Federal Reserve Bank of Atlanta. In addition, Ms. Gambrell is a board member for Southern Bancorp, Inc., in Little Rock, Arkansas, which is one of the nation’s largest CDFIs, as well as a board member for AEO, a national membership organization and voice of microbusiness development in the United States.

In addition to her work at the Treasury Department, Ms. Gambrell served in several executive positions at the Federal Deposit Insurance Corporation (FDIC), including Deputy Director for Compliance and Consumer Protection, where she was responsible for overseeing the FDIC’s national compliance bank examinations, as well as the agency’s community affairs, consumer affairs, and deposit insurance programs.

Ms. Gambrell received a B.S. Degree from Towson University in Baltimore, Maryland, and an M.S. Degree from New York University. She has been recognized over the years for her commitment to community and economic development and to consumer protection issues.