Saved by An Unlikely Friendship 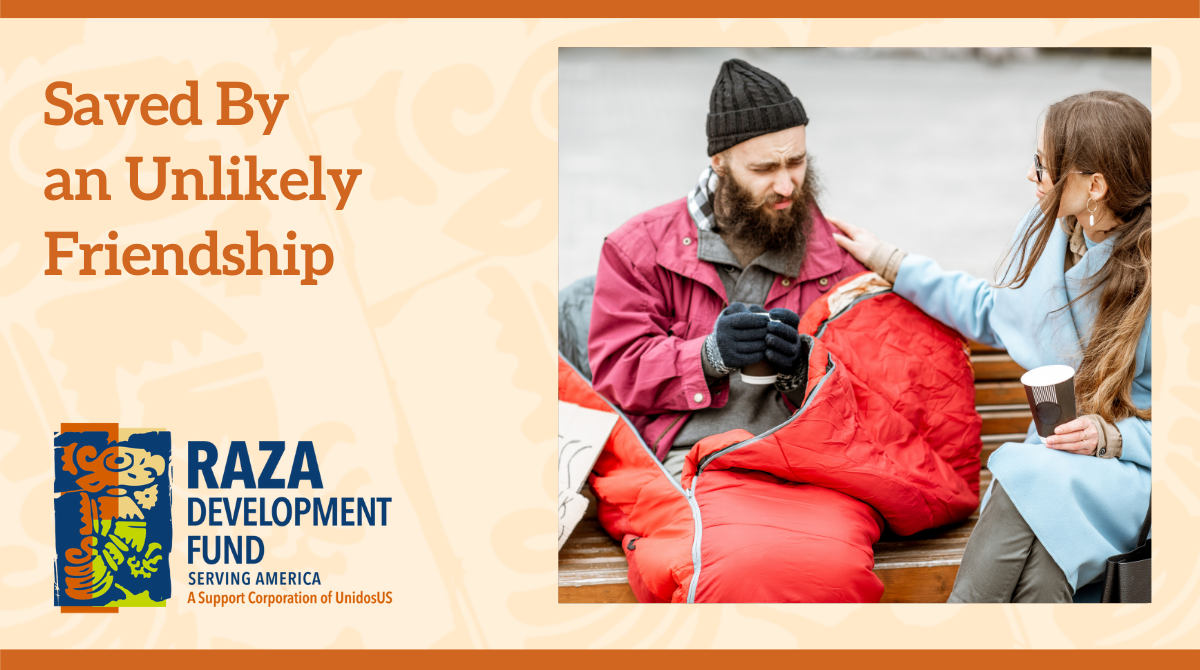 Everyone has a story to tell. RDF’s organizational chart includes short bios about each member of the Familia that list our professional experience while touching on small tidbits of our community service history. While working on this project, I was intrigued by a comment Catherine Andrade, RDF’s Sr. Loan Portfolio Specialist, shared in her bio “took paying it forward to the next level by helping a homeless man off the streets and reconnect with his family.” It’s one statement with a great story that shows Catherine’s heart of servantship.

Hear how this unlikely friendship unfolded in a Q&A with Catherine.

How did you meet this man? In 2016, on my way home from work at RDF’s former office in Downtown Phoenix I was stopped at a stoplight and saw a gentleman standing there. It was summertime and very hot, so I gave him bottles of water through my window. Every day, he was there at the same time, so every day we began to have little conversations to get to know each other.

I don’t know what drew me to him. I just felt something pulling me toward him. He didn’t seem dangerous, I just got the impression that he was lost, and he needed help. I started bringing him food, packing a lunch for myself and one for him. On Fridays, I would bring him any leftovers from the office to hold him over through the weekend. During the winter, I bought him a beanie, gloves and a sweatshirt. I just wanted him to stay healthy.

As the days went on, I learned he had been living on the streets for seven years and was separated from his family in the Midwest.

How did you reconnect him with his family?

At one point, he almost secured a labor job, and I tried to help him collect tools to be successful, but he pushed back. He didn’t want to take them because he couldn’t store them anywhere and he didn’t want them to get stolen. He said all he wanted was to find a way back home to his family.

Our conversations had gone on over the course of a couple of years, so with the information I had learned about him I decided to help find his family. I just knew he couldn’t survive on the streets, and I wanted to help. I searched for them online over social media until eventually I found his sister.

She told me her brother had been in an accident resulting in a head injury and a mental health complication. He began doing things out of the ordinary until one day he was gone, and his family had no idea where he was.

I needed to make sure I found the right people, so I downloaded a few photos of her to show him. The look on his face that day I’ll never forget. “That’s my sister. That’s my niece!” he exclaimed. He held the picture to his chest and raised his hand up to God. He was just mesmerized.

I offered to buy him a plane ticket home, but he told me not to. He wouldn’t accept any money either. Luckily, I had previously referred him to St. Vincent de Paul where he met someone who was going to give him a ride home. He had planned to go in the spring to avoid traveling in the snow.

Did he make it? His sister and I stayed in touch. I let her know he was heading home, and she let me know when he arrived. In fact, about four months ago, she called me to let me know he got an apartment and a job and is back to who he was before he left.

To know that he’s back home where his family is and is supporting himself, that was the most rewarding part.

It’s quite a story. Is this your first time helping someone in need?

No. I volunteer for Singleton Moms, a group that supports mothers undergoing chemotherapy treatment. I often buy food when I see others in need.

I can’t explain it. I don’t know if God put me on this Earth to spot out people who need help, but I’m just constantly doing that.

What advice would you give someone who may want to help in this way?

You have to be careful. I get caught up in this. I once got too close to a family I was supporting and went above and beyond to help them out only to find out the mom was fraudulent.

Definitely give and help if you can but be careful and be mindful. In the case of this gentleman, I went with my gut. There may be some people who will take advantage of you, but when you find someone that you can help it means the world.

Catherine’s story is an inspiration of the impact simply acts of kindness can create. And it’s one of many great stories embedded in the short bios representing our RDF Familia of servant leaders.

For more tips on how to help with mindfulness visit https://nationalhomeless.org/taking-action/get-involved/