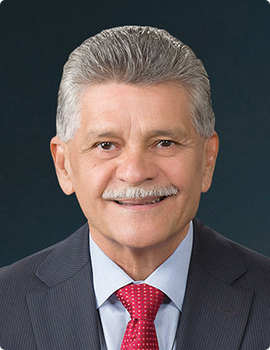 Currently, Tommy Espinoza is the President CEO and Co-founder of Raza Development Fund (RDF), the largest Latino Community Development Financial Institution (CDFI) for the past twenty years in the U.S., with half a billion of dollars in total assets under management. In 1998, Mr. Espinoza pioneered a faith-based approach to community development, establishing Partnership of Hope (POH) and the Hope Fund now RDF. Under Mr. Espinoza’s leadership, RDF has provided capital to Latino-serving organizations nationwide. These organizations have received technical assistance and loans which have leveraged over $5 billion in private capital for education, affordable housing, and healthcare projects serving low-income families and individuals.

Mr. Espinoza currently serves on the Catholic University of America Board of Visitors for the School of Arts and Sciences, LISC National Board of Directors, the Catholic Association of Latino Leaders National Board, and the Greater Phoenix Leadership Board of Directors. Tommy’s various leadership positions include President of the Arizona State Board of Education (1986) and he has received numerous recognitions and awards including the SRE Secretaría de Relaciones Exteriores (Mexico) Reconocimiento OHTLI, the highest honor given to a person out of Mexico for distinguished work serving the Mexican community (2005), Valley Leadership Man of the Year Award (2014), Arizona Asian Chamber of Commerce Lifetime Achievement Award and the Arizona Hispanic Chamber of Commerce Legacy Award (2019), The Tia Foundation Luminaria Award (2020), and Doctor of Humane Letters, honoris causa from The Catholic University of America (2021).